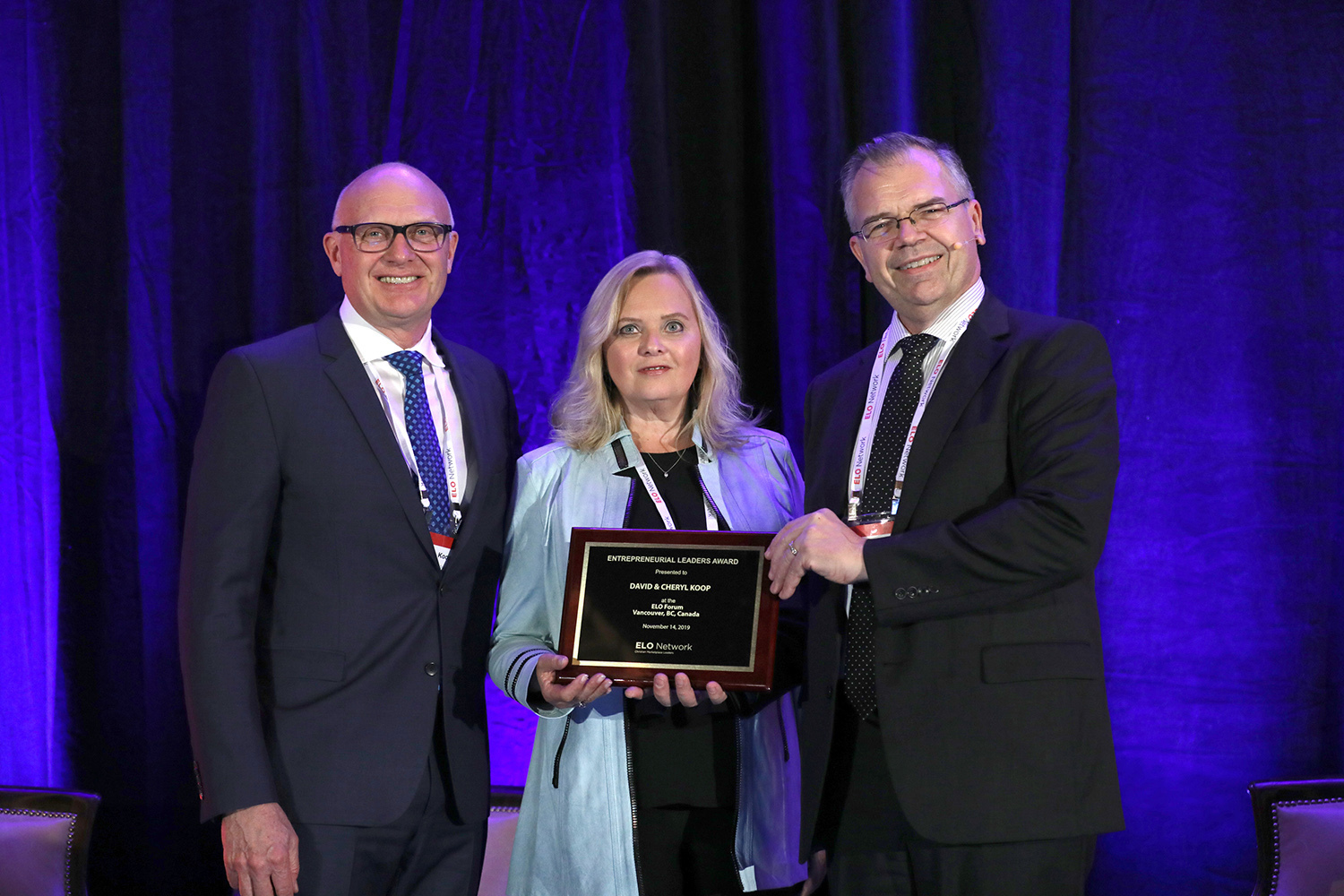 Dave & Cheryl Koop, Lead Pastors, Coastal Church, Vancouver – David and Cheryl Koop, founders and lead pastors of Coastal Church in Downtown Vancouver, were presented with the Entrepreneurial Leaders Award by Rick Goossen, Chairman, ELO on November 14th, 2019.  Dave Koop, in accepting the Award, commented on the significance of pastors receiving an award from a business organization for entrepreneurial leadership.  One attendee noted: “The fact that ELO honoured two pastors as by doing so honoured all. And, that God is at work all around us!”

Pastors David and Cheryl are well-known as positive collaborators with other Christian groups in the furtherance of the Gospel.  They have also been supportive and encouraging of ELO for the last decade or so.  Pastor David has been on the ELO Advisory Board for many years.  Coastal Church has provided volunteers for many ELO Forums over the years.

Pastors David and Cheryl have embraced the call of believers to the marketplace. Twenty years ago, they founded a monthly lunch called “Business by the Book” (BBTB) to minister to those working in the marketplace.  BBTB would have a monthly luncheon to bring in various speakers and served thousands of business leaders over the years.

Pastors David and Cheryl are currently championing a Canadian Centre for Arts and Technology in downtown Vancouver.  In addition, under their leadership, Coastal Church in partnership with Message Trust Canada has pioneered the Eden Project to reach the hurting in Vancouver’s Downtown East Side, one of the poorest areas in Canada.  They are currently preparing for the grand opening of Eden Café, a for-profit social enterprise where the profit goes back into supporting the community and where employment opportunities are provided to those recovering from addiction or recently released from incarceration

THE STORY OF COASTAL CHURCH

In 1994, Pastors Dave and Cheryl Koop dreamed of planting a church with a simple goal – to help urban people connect with God so that they might enjoy the abundant life of Jesus Christ and reach their full potential. With the help of a core group committed to seeing this dream become a reality, Coastal Church began Sunday services on September 11, 1994. That Sunday 40 people attended the first service at the Landmark Hotel on Robson Street in the West End of Vancouver.

On Easter in 2001 Coastal Church had their first service at 1160 West Georgia Street, not as owners but as tenants of the building.  As a congregation, they prayed and believed that God would make a way for them to purchase the building, even though it was drastically outside of their price range and the new building owner wasn’t open to selling.  God moved in miraculous ways as the congregation engaged in fasting and prayer.

In August 2002 Coastal Church purchased 1160 W Georgia Street and had their Grand Opening Dedication Service to the Glory of God in November. This was a huge moment for the church as they celebrated finally owning their own permanent meeting space. The following day they were contacted by the City of Vancouver, asking if they would consider selling the property’s air rights to a potential neighbour (the Shangri-La Hotel) which would be the highest building in the city. This started the conversation of a possible heritage building renovation, which they did in the years to come.

From the beginning, Coastal Church focused on reaching out to the non-churched community by building relationships through small groups and the Alpha course. Different methods were used to reach out to the Vancouver community.  These small groups, along with relevant life-giving messages brought steady growth to Coastal Church in one of the most “unchurched” areas of Canada.

Today several thousand people attend the weekend services of Coastal Church in five different campuses, joined by a thriving online campus via live stream services, and meet weekly in about 150 life groups throughout Vancouver and the surrounding area.  Every weekend people from all ages and all walks of life, from more than 75 different nationalities gather at Coastal Church to do life and grow in God.