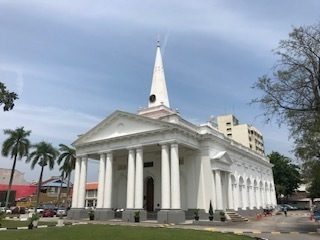 ISLAND OF PENANG, MALAYSIA – JULY 4, 2019 – The Island of Penang, off the west coast of Malaysia, is a popular destination, a couple of hundred of years ago for British colonialists and today for tourists.  Penang combines a hot climate, beaches, historical attractions and a favourable currency.  George Town, with a present population of 700,000, is the main town on the Island.  The historical core of the city is a UNESCO World Heritage Site—and well worth seeing.  While Penang is known for its tourist environment, embedded in both its history and present is an entrepreneurial spirit.

THE BUSINESS OF EMPIRE - Firstly, there is the entrepreneurial spirit that is part of its founding—an interesting interconnection between politics, church and business.  George Town was established by Francis Light (1740 – 1794) of the British East India Company in 1786.  Penang was built on commerce.  George Town served as the capital of “The Straits Settlements,” a loose grouping of British crown colonies that included Penang, Melaka (500 kilometers south down the coast from Penang) and Singapore (another 240 kilometers south from Melaka).

An interesting side note is that the growth of the British Empire was largely driven by commercial rather than political interests.  The government followed as the British East India Company paved the way. The island became a regional centre for spice production and a bustling harbour during the heyday of British rule. As the first British trading post in the East, Penang attracted travellers and seafarers of all kinds.

Francis Light was not only interested in founding a trading post, but a community.  His vision for George Town, interestingly enough, included a church to serve the settlement.  His vision came to light with the establishment of The Church of St George the Martyr in 1817, the first Anglican church in South East Asia.  This small but well-designed church began as a place of worship for civilian and military officials of the East India Company.

The church was commissioned by the East India Company and paid for by them.  That’s an interesting fact.  A commercial enterprise has the vision to set up the church, finances and builds it, and staffs it.  Yet, it was still an Anglican Church under the control of the Church of England.

Light appears to have shed some.  There is a memorial to him on the grounds of St. George’s, reflecting then-common paternalism:  “In his capacity as governor, the settlers and natives were greatly attached to him and in his death, had to deplore the loss of one who watched over their interests and cares as a father.”

What of the church today?  St. George’s recently celebrated its 200th anniversary and is designated a heritage building by the Malaysian Government.  The stated vision is to, “Empower Disadvantaged Children through Education - Academically, Life Skills and the Christian way of life.”    As a church representative told me, “the past of the church doesn’t guarantee its future.  It needs to keep making itself relevant.  We care for the needs throughout the community as we believe Jesus would have us do.”

EGG TART ENTREPRENEUR – The entrepreneurial spirit is evident in the fabric of Penang.  Everywhere in the world, the making and providing of food provides an avenue for entrepreneurial aspirations.  Some of the most famous entrepreneurs include the founders of McDonalds, the Colonel from KFC and Tim Hortons of Timbit fame.  A small-scale example in Penang is the so-called “egg tart entrepreneur.”

The egg tart is the signature product of Ming Xiang Tai.  The company was started by Madam Yin Yu Qun in the 1960s as a home-based business.  It was up until the 1970s that Madam Yin’s son, Au Chee Teck and his wife, Madam Chung Mooi used a trishaw cart to carry these egg tarts to be sold in the local town.  The egg tarts were then named as the “Trishaw Egg Tarts,” to honour his parents’ hard work in selling these pastries.  Once you have had one of their egg tarts, you can never turn back!

HOTEL ENTREPRENEURS - Another fascinating entrepreneurial story relates to the “Eastern & Oriental Hotel.” With the opening of the Suez Canal in 1869 and the arrival of the steamship, travelling to Asia was not only more accessible, but also took on unprecedented style and luxury. Four Armenian brothers, the Sarkies, saw an opportunity to cater to this new market.  The Sarkies developed a small chain of high-end hotels.

The first of these, in 1885, was the Eastern & Oriental Hotel, once pronounced as "The Premier Hotel East of Suez", boasting more than 100 rooms, 40 of them with adjoining bathrooms, hot and cold running water, individual telephones and a 902-foot seafront, "the longest of any hotel in the world".  The hotel chain also included The Raffles in Singapore and The Strand in Rangoon (Burma, now Myanmar).

In its long and colourful history, the E&O Hotel in Penang has seen two World Wars, the wane of the British Empire as well as the birth of Malaysia in 1957. It has welcomed the glitterati of the literary and entertainment worlds including Mary Pickford, Douglas Fairbanks, Noel Coward, Rudyard Kipling, Somerset Maugham and Hermann Hesse.

Of course, the storied past does not guarantee a glorious future.  Today, the E & O Hotel has reinvested in maintaining the property (in fact, it is presently undergoing an extensive renovation).  The rates at the hotel are quite reasonable for a high-end establishment.  The hotel has top-notch service and ambiance.  In particular, the afternoon tea in the Palm Lounge on the 6th floor, with its expansive view of the waterfront, is a special treat!

So, the E & O lives on and is thriving over 130 years after its founding.  Today, the E & O Hotel in Penang, with its graceful elegance and storied colonial charm, remains one of Asia's truly great hotels.