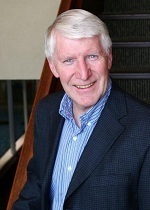 NEWS RELEASE – WINNIPEG, CANADA – JANUARY 24, 2019 – Dr. Richard (Rick) J. Goossen, Chairman, ELO, is pleased to announce that John Courtney, Executive Director & Board Member, Youth for Christ Winnipeg will be receiving the “Entrepreneurial Leaders Award” at the ELO Forum & Awards Gala on April 30th, 2019 in Winnipeg, Canada.  Dr. Goossen noted that John is a great selection as he has worked tirelessly and will be completing 47 years of service in June 2019.  During his time YFC has grown to have the largest facility of any YFC in North America.  John has spent a lifetime putting the needs of other first.”  Dave Brereton, former Chair of YFC Canada and now Chairman of YFC International, has known and worked with John for many years.  Dave commented that, "John is a visionary with a huge heart for God and for the kids in his city of Winnipeg. I remember vividly when he would share his dream of a beautiful modern facility where we could serve all kids and their parents. We stood together on an empty piece of ground that he did not own yet and committed this vision to God.  Then John took action with huge steps of faith to see it come to fruition. God honours faith."

Therefore, we seek to listen to spiritual promptings, discern their merit and promote innovation. We strive for excellence.”  John joined YFC Winnipeg in January 1973 as the Director of the High School ministry called Campus Life. In April 1977 he was appointed Executive Director.  John has been married to Susan for over 44 years.  Together they have three sons and 8 grandchildren.

John graduated after three years of biblical and pastoral training from Eastern Pentecostal Bible College in 1970. He was ordained in 1972. In 1980, he obtained a Bachelor of Religious Studies degree from Mennonite Brethren Bible College (currently known as CMU).  In 1986 he obtained a Master of Ministry degree from Winnipeg Theological Seminary.  In 1992 he obtained a Master of Arts degree from Providence Seminary and in 2011 he was awarded a Doctor of Ministry degree from Providence Seminary.  John is passionate about the mission of reaching youth who have no idea God loves them and what He has done for them. A good holiday is exploring places he has never been, especially in a small fishing boat or on gravel-isolated roads. He deeply loves family.

The purpose of the ELO Entrepreneurial Leaders Award to recognize the track record of a person(s) who can serve as an inspiration to others to pursue Christian entrepreneurial leadership.  John meets all the criteria for Identifying a suitable nominee.

The recipient of the Award must be a role model to inspire other entrepreneurial leaders to others to greater heights of significance.  John serves as a great inspiration to leaders in the Christian community as an example of the impact people can have in their community—whether in business or a non-profit—through dedicated service over an extended period of time.