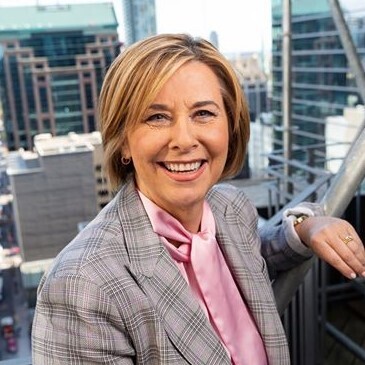 Lorna Dueck has explored the intersection of journalism and Christianity for over 30 years. Lorna has hosted the award-winning TV program Context with Lorna Dueck, which featured news analysis from a Christian perspective. Most recently, in 2016, Lorna was appointed CEO of Crossroads Christian Communications Inc., home to Canada’s longest-running daily talk show 100 Huntley Street. In addition, Lorna serves in the role of CEO to the YES TV network, a commercial television station committed to positive, family-friendly entertainment programming.

Lorna is also a commentary writer on faith and public life in Canada’s leading national newspaper, The Globe and Mail, and a frequent media commentator. She has travelled the world reporting on the church-led response to humanitarian crises, creating media campaigns around that reporting. She has published hundreds of articles in various outlets.

Lorna completed a Bachelor of Religious Education at Tyndale University College in Toronto and earned a Master of Arts in Evangelism and Leadership from Wheaton College. She has received honorary doctorate degrees from Trinity Western, Tyndale and Briercrest Universities. Lorna has been honoured with the Queen’s Diamond Jubilee Medal for contributions to Canadian society. Lorna and her husband, Vern, of over three decades, live in Burlington, ON, and delight in the adventures of their grown son and daughter.