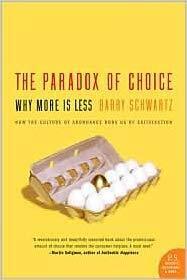 The trail of happiness, on the way to meaning and fulfilment, has hit a dead-end.  An excess of choice has achieved autonomy but sacrificed contentment.  The black hole of meaning, reflected in ballooning depression, remains out of reach.  Maybe there is another option.

The Paradox of Choice:  Why More is Less (Harper Collins, 2004), by Barry Schwartz, is a fascinating and still highly influential book.  Schwartz describes a society awash in choice, practically drowning in options, and yet perpetually unsatisfied.

There is no sense of contentment.  One would have expected that the rampant freedom of choice would have made people happier, but in fact, the opposite is true.  People are miserable.  More specifically, they are in greater numbers clinically depressed.

For those of us who think that faith, embedded in thousands of years of revealed wisdom, might address the core longings of people, this book and its research is quite intriguing.  In essence, Schwartz demonstrates that people absorbed in themselves, and serving their own pursuit of choice, will not find happiness, but will be mired in perpetual discontent.  Something is missing.  Could it be faith?  Blaise Pascal, a French mathematician and theologian of the 1600s, talked about the God-shaped vacuum with us.

Schwartz notes that choice is typically associated with freedom and autonomy, and thus, in modern minds, seen as good.  This is a false assumption.  Schwartz argues that we should not equate personal liberty too solely with choice.  He believes that people don’t necessarily increase freedom by expanding the number of options available.” [4]

The explosion in options and opportunities for choice has, instead, had three unfortunate effects:  decisions now require more effort; mistakes are more likely; and the psychological consequences of mistakes are more severe. [74]

He confirms the findings of anecdotal experience: choice does not produce happiness.  Instead, Schwartz observes, “What seems to be the most important factor in providing happiness is close social relations.  People who are married, who have good friends, and who are close to their families are happier than those who are not.  People who participate in religious communities are happier than those who do not.”  [107]  That’s an interesting corroboration of a Christian way of life from an unlikely source!

A source of discontent for people is “adaptation”; we get used to things, and we begin to take them for granted [167].  Most people are driven to pursue novelty, to seek out new commodities and experiences that have not yet lost their freshness.[172]

What can be done?  An attitude of gratitude is helpful.  Schwartz explains that “…individuals who regularly experience and express gratitude are physically healthier, more optimistic about the future, and feel better about their lives than those who do not.  Individuals who experience gratitude are more alert, enthusiastic and energetic than those who do not, and they are more likely to achieve personal goals.” [179] In a Christian context, “gratitude” is akin to praise, prayer and thanksgiving, which is done on a continual basis.

Schwartz explains that an attitude of gratitude is often undermined by two “curses.”  First, he refers to “the curse of high expectations.”  He states, “We can probably do more to affect the quality of our lives by controlling our expectations than we can by doing virtually anything else.” [187]  Success in this area relates to the discipline of the mind.  The Apostle Paul has much to say about disciplining one’s mind and thoughts;  most appropriately in this context he notes, “godliness with contentment is great gain” (1 Tim 6:6).

Second, there is “the curse of social comparison.”  Schwartz points out that when one evaluates oneself--“how am I doing?”—one almost always does so by comparison to others [188].  He explains, “This essentially universal and unrealistically high standard of comparison decreases the satisfaction of those of us who are in the middle or below, even as the actual circumstances of our lives improve.” [191]  A Christian antidote to the curse of social comparison is to be grounded in calling, which is person-focused rather than externally-oriented.  We are only responsible to live our unique calling, not someone else’s.  Instead, as the Apostle Paul shares, “but I have learned in whatever state I am to be content” (Phil 4:11).

On the one hand this is puzzling: “The American middle class now experiences control and personal autonomy to a degree unimaginable to people living in other times and places…[clinical depression should be disappearing]…instead, we see explosive growth in the disease” [209]  People are not thriving in an era of choice.

Schwartz laments the lack of contentment in society: “Here we are.  Living at the pinnacle of human possibility, awash in material abundance.  As a society, we have achieved what our ancestors could, at most, only dream about, but it has come at a great price.  We get what we say we want, only to discover that we want doesn’t satisfy us to the degree that we expect.”  [221]  Clearly, the ability to satisfy various wants and needs has not addressed core lack of meaning and significance.

What are the implications for Christians?  For starters, people need to dig deeper, to the fundamental issues of significance and meaning—and beyond the superficial pursuit of choice as a path to happiness.  A Christian approach is rooted, by contrast, in a clear sense of calling.  Calling means to have an anchor, a core and a sense of direction.  Happiness is not tied to autonomy and choice, but rather to significance and the pursuit of calling.

The Christian life offers fulfilment through living a life of calling. There is no fulfilment in choice and autonomy; instead, the emphasis is on service, discipline and living in accordance with biblical principles.  The Christian life stands in stark contrast to the orientation of society with its self-centered nature and self-fulfilment through choice—which ultimately doesn’t fill the vacuum of people’s lives.