Destroying the Myth of Science Versus Faith: The Poppycock of the New Atheists (Part I) 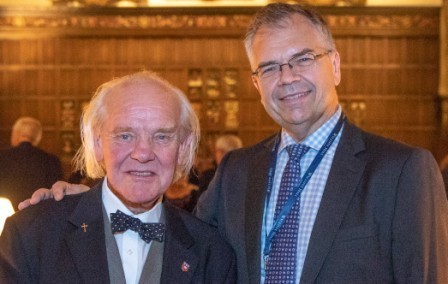 [NOTE:  This blog is the first of two blog posts focused on Allan Chapman and his book titled, Slaying The Dragons:  Destroying Myths in the History of Science and Faith (Oxford:  Lion Books, 2013).]

Allan Chapman teaches history of science at the University of Oxford.  He is a delightful and self-effacing individual, quirky, full of energy and extremely knowledgeable.  He’ll even provide marriage advice when prompted.  He describes himself as, “A Lancashire lad from a working-class background with no silver spoon to suck…and a general pain in the nether regions to normal ‘decent’ folk…but [who] has never had a problem accepting divine transcendence” [179].

He is a Fellow of the Royal Astronomical Society and author eight books, including Slaying The Dragons:  Destroying Myths in the History of Science and Faith (Oxford:  Lion Books, 2013).  This blog is focused on Slaying the Dragons.

He was a presenter in the “Entrepreneurial Leaders Programme” offered by the Entrepreneurial Leaders Institute, Wycliffe Hall, Oxford, last August (see http://www.entrepreneurialleaders.com/blog/161/OxfordLaunch).   The broad theme of Slaying the Dragons–the conflict between science and faith—is quite relevant to all Christians, including business leaders.  Christians attempting to credibly apply their faith in the marketplace do so within the context of our broader culture.

If the broader culture discounts and mocks Christianity, relegating it to the superstitious, non-provable, nay even non-rational, sphere, then proponents of Christianity generally are less likely to stand up and be counted.  So, Chapman’s book about the history of science and the present-day claims of the so-called “New Atheists” (this distinguishes present proponents such as Richard Dawkins from the “Old Atheists” such as Bertrand Russell and Alduous Huxley) and a response thereto in fact has important lessons for Christians in business.

Chapman has grown tired of the myths propagated that science and faith, particularly Christianity, are in conflict and that science is only succeeded by overcoming the objections of the church and religious people. Chapman’s focus in the book is that, “Secular mythology…has become a dragon that, in the last fifty to a hundred years in particular, has been allowed to spew out its poisonous breath upon many aspects of Christian culture, largely unchecked.  But it is now time to face the dragon on its own ground.  And to slay it!” [241]

As a Christian and a teacher of the history of science Chapman has witnessed how the present secular and atheistic forces in Western culture have worked to negate well-documented Christian contributions to centuries of science and the formation of Western culture.

There are various myths peddled by the New Atheists.  One is that the misguided and anti-science church muzzled noble Galileo.  This is a false set up.  In fact, “Galileo argued that God had written two books; his word (the Bible) and his works (nature), and these could never contradict one another when read and interpreted correctly and prayerfully.” [106]

During the so-called “Age of Reason” in the 18th Century there were many Christians who “saw no conflict whatsoever between their faith and their science.  Indeed, quite the reverse; for many explicitly stated how they saw their science as complementing and enhancing their belief in a beneficent deity.” [70]

So, let us lay aside the myth that the Enlightenment somehow liberated humanity from ignorance and oppression.  “Great scientific discoveries continued to be made by Catholic and Protestant Christians across Europe, and the great humanitarian movements, all of which helped make the world a truly better and more just place in practical terms, were largely triggered by the Christian conscience and not by ‘Enlightenment’ idealism.” [74]

Another myth is that Charles Darwin shook up a naïve Victorian society with his theory of natural selection.  Chapman points out that, “Yet to assume that when Darwin’s On the Origin of Species was published in 1859, it horrified and stunned a nation of simple biblical fundamentalists who all sore by a creation date of 4004 BC, is pure nonsense.” [130]  In fact, Victorian Christians saw no threat in the new science, and some even found it strengthening their faith [145]

He notes how Christianity has in today’s environment become every secularist’s favourite target of scorn and derision, without impunity.  Chapman points out the value of the Christian approach as a foundation for the development of science in the West:  “…it is monotheism that is the father and mother of the concept of a natural world that makes (or appears to make) logical sense.” [18]

The challenge, however, is the elevated role of “scientism”—and not “science”—in Western culture, stretched beyond its empirical capabilities.  Scientism is “the worship of science and the scientific method as an infallible guide to absolute truth in itself.” [46]

Chapman notes that, “What is worrying in our own day, however, as the secular materialists have come to occupy so many important positions in our universities, the media, politics…is that the legendary intolerance of the puritan and ideologues ….is being openly directed against Christianity, and in many cases encounters very little resistance.” [209]

Yet, Christianity has much to offer—and it is unique, disregarding another inaccurate generalization that all religions are the same.  “Yet one thing was stunningly unique to the Judean, and especially the Christian, tradition:  its morality.” [210]  “Christian teachings about human worth, kindness, mercy, justice, and the underdog became so deeply ingrained in the Western psyche that we have come to assume they are natural.” [210]

Chapman doesn’t think the New Atheists have good arguments; rather they have a supportive culture and they go unchallenged.  The passivity of too many Christians have aided the rise of the New Atheists.  “What is unfortunate is that the Christian church across denominations has allowed aggressive atheists to get away with so many things largely unchallenged…and has certainly had little influence on the perceptions of what might be called ‘ordinary people.’” [215]

Chapman lays out a challenge for Christians.  “But it is essential that in the twenty-first century Christians learn to engage dynamically and critically with this sleight of hand and force the atheists to face and acknowledge their own slippery intellectual habits.” [216]  According to Chapman, the atheist’s faith in their own arguments is poppycock—and it needs to be exposed.